The Making Of: The DRM Soundtrack

So for the last five or so months, Me and Jenny have been writing some original synth-wave music for Rob Fearon’s upcoming PS4, PSVita (and probably other formats) abstract arcade arena shooter called Death Ray Manta.  No one knows just yet what exactly what Rob has up his bizarro sleeve – but what we can tell you is that he’s making what could be the world’s first synth-pop videogame.

First, a bit of background:

Jenny has been making music for a long time now, having established herself as a one-woman synth pop goliath ‘Jenny And The Giants’.  She released an EP not long ago which was met with great critical acclaim and admiration.

I’ve been making blippy bloop beep videogame music for a while myself under the moniker of Barry Island.

This cover version went down quite well, getting airplay on Resonance FM’s ‘One Life Left‘ podcast.

We enjoyed the experience of working together so much we thought, you know, let’s keep doing it!  All we needed was an outlet…

Having worked with Rob before, knowing what he likes and what would suit his game, we made a proposal, had a chat and agreed to dedicate the next few months writing a concept album for him and his friend Andy White to accompany their revisiting of Death Ray Manta for Sony platforms.

Between us, we used a variety of music creation softwares to get to work on this album.  We wanted a synth-wave vibe, we wanted electo-pop music.  We also wanted to tell the story of a girl who falls in love with a laser firing space-dwelling fish.

I tend to make music using tracker software.  Jenny tends to make music using Logic.  Luckily, our mutual output managed to combine in just the way we’d hoped.  With Jenny’s production skills, sophisticated song writing ability and floaty spacey voice – combined with my unmistakably videogame influenced output – it wasn’t long before we had seven tracks we were all really pleased with.

Writing the music was incredibly fun.  It’s impossible to not enjoy yourself when you’re writing fast, quirky and cool pop music. The tracks are a mixture of my tracker music with Jen’s vocal accompaniment, Jen’s own creations and direct 50/50 combinations of our two techniques.

With the album’s content finished in February 2015, next up was mastering.  We found a studio in Bristol that specialised in synthy stuff (and also was within our meagre budget!).  It was mental.  Speakers and vintage synths everywhere.  Mastering is something I don’t know a lot about, so I learned a lot during the process.

Mastering is a much more arduous process compared to the rapid satisfaction of thinking of a melody, arranging and recording it.  It’s all about new stuff I’ve never come across like stopping funny resonance things and dynamic volume levels on parts.  Listening to the same 10 second loop over and over looking for ways to make it sound better.  For all its Guantanamo Bay style psychologically draining qualities, the moment you listen back to the finished track in all its glory its worth all the torture and more!

One of the unexpected bonuses of using this studio was that we were able to increase the authenticity of the synth-wave vibe of the music by replacing some of our midi tracks in Logic with actual vintage synths.  Check out some of these brutes we’ve used:

I’m not entirely sure what these synths are called.  One’s called the Jupiter something, I know that.  I’ve never been very knowledgeable about hardware.  I’m more of a notes man.  But boy did they look and sound cool!  Using real, authentic era synths instead of synth VSTs added a layer of quality that we are incredibly grateful for.

One synth even had cartridges with FM sounds on.  You can’t beat an FM slap bass! 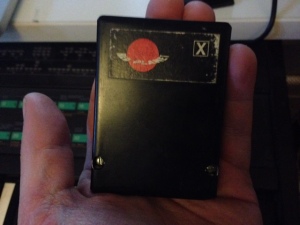 Another amazing thing about mastering in a properly kitted out studio is we got to make sure it’ll sound great on all sizes of speakers.  We tried it on shoulder height beasts, palm sized babies and everywhere in between.  The game should sound equally as good on a Vita, a 14inch TV, a home cinema system, headphones or even a car stereo!

So with the soundtrack now essentially complete save for a couple more sessions in the studio to polish a bit here and there, we’re sitting back and basking in the glory of it all.  And it is quite glorious.

We’ll not release the album until the game is out, but when we do it will be on iTunes, Spotify, Bandcamp, the PSN store and as many other outlets as we can.  We are also doing a limited run of 50 physical CD’s, but more on that closer to the time.

Another really quite splendid thing about the soundtrack album is that the album artwork was created by games industry legend Ste Pickford who’s games I have personally enjoyed for many years (I spent many, many hours playing Wetrix on the N64).  He’s also a lovely guy with a lovely beard.  It’s an absolute honour to have his artwork adorn the album sleeve.

As I write this, we don’t know when the game will be released, but that’s cool because game development shouldn’t be led by release dates.  Things are finished when they’re finished, and if anyone knows how to make a synth-pop abstract arcade arena shooter it’s Rob 🙂

But when the game and its soundtrack is out, we’ll be sure to let you know!

In the mean time, I’ll be going back to making video games and my usual stuff.  But if anyone reading this enjoyed the preview tracks and needs any music for their game, feel free to drop us a line!

Oh yeah, one last thing, this cat also helped master the album.  Her name is Jazz, short for Jasmin.  She’s really old and very sweet.  We call her CATBOT 3000

Hello!  So it’s been a long time since I’ve updated this blog.  Over a year!  Bla bla should try and do it more often.

So a whole lot has changed since the last update!  Achieved a whole lot and done some ace projects with some new ones on the horizon. Anyway, less chat more updatez!

This was finally released in North America on 4th November 2014, and 5th November 2014 in the EU.  Fireworks night no less!  Quite fitting.  Here’s the launch trailer:

Avoid Droid ended up being called Don’t Die, Mr. Robot.  That’s because Lucasfilm have a trademark on the word ‘Droid’ which apparently they vigorously enforce.  We didn’t fancy that so we changed the name.  Actually, it was our pal Rob Fearon who came up with the name, so cheers mate!

It did well!  Currently at at a metacritic score of 77

It got load of awesome reviews which you can read about here on the ISG blog:

DDMR was the biggest release of our independent career so far, so it’s quite a big deal for us to have finished it, got it out the door and well received by critics and players alike.  Plainly speaking – we did a great job considering no budget!

I’m now working on the soundtrack to Rob Fearon’s Death Ray Manta for PSVita and PS4. It’s a musical collaboration with the very talented Bristol based singer and musician Jenny Ramage under the banner of ‘Jenny and the Giants’.  This is quite an interesting project because it’s the sound track for a game, but also a concept album of catchy electropop songs which tells the story of a girl who’s fell in love with a sentient, omniscient space fish which fires lasers from its head.

The game is due out at the end of 2015.  At the time of writing this blog, we’re just mixing down all the tracks.  Next week we’re off to the studio to master them, so I’ll probably try and blog about that part of the process because it’s interesting!

Remember Frutorious? Don’t worry, no one else does either.  However, we do!  During the last 2 years while doing all our other stuff, we’ve been quietly and slowly working on the ultimate edition of Frutorious.  We’ve fixed all the shitty levels, we’ve put in a new guide line to help you aim – and we’ve given the whole game an HD overhaul upping the quality of the graphics.

It’s playing great, it’s looking great, and when we’ve got a bit of spare time we’ll release it!  But only when it’s the right time.  One does not simply ‘ship’ a game like Frutorious HD.

Here’s some video of it running –

Oh yeah!  On top of all that, we’re making a new game over at ISG!

Wing Kings is an air combat dog fightin’ roguelike. We’re developing it for PSVita and PS4 for release in North American and Europe (sorry, Japan!)

We’ve hired an artist for this one too (WOWZERS!) He’s an industry veteran who may have worked on some of your favourite games, who knows! Check out this hot mock up…

We’re currently prototyping, and already dogfighting is tense and explosive, while landing is nailbiting and exhilarating.  So far so good!

And that’s it!  Loads of great stuff going on, and personal satisfaction levels at an all time high – for which I must thank Jenny and Charlie for being my two sources of joy, productivity and inspiration.  And thanks, yourself, for reading about my things wot I’m doing!

See you next time!