So the other day I ordered myself a modified Game Boy so I could make some music on it.  I got it from the excellent Game Boy Mods UK.  The one I ordered has a Pro-Sound Mod (which makes the output a bit louder and less crackly) – a new headphone jack for that, two RCA jacks out the top for super lovely sound output, a backlight (for playing in the dark) and a bivert mod (which makes the contrast a bit better.) Here it is… 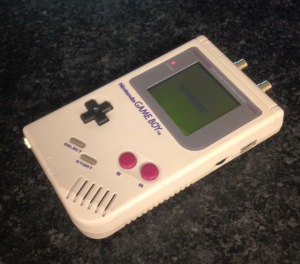 So why bother making music on a shitty old 1989 original DMG Game Boy?  Well, basically because it sounds cool as fuck. Yeah you can emulate these sounds with plugins for your favourite DAW or you can use Mac/PC trackers with these sort of sounds, but you ain’t getting them to sound as nice as the real sounds coming out of the real hardware.

To make the music, I’m using a programme called LSDJ.  It’s basically a tracker for a Game Boy!  It also works on GBC and GBA’s.  To use the programme you’ll need to buy a license, download the rom and stick it on a flash card. 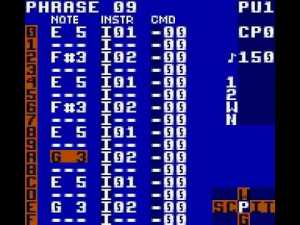 Here’s what LSDJ looks like.  On first look, it seems like a complete cluster-mare.  It kinda is, but as far as cluster-mares go, it makes a lot of sense.  The UI has been minimised and streamlines so it’s literally *just* what you need with no faff or guff.

If you’ve ever used a Tracker before it should make sense in about 5 minutes once you’ve got your head around the way it breaks down patterns into chains. It’s really good fun to make tunes on LSDJ and if you have a Game Boy and a musical osscicle I’d really recommend this approach to making tunes.  The massive limitations pushes you to be really cunning on how you fill out the sound scape, and having those authentic sounds you grew up with dancing to your own tune feels extremely satisfying.

Here’s a tune I made after owning the device for a week.  I have called it ‘Pickled Egg’ because when I finished it I fancied a pickled egg.

I’m looking forward to learning how to use it better: next mission is to work out how to get a phat kick drum so I can make the music for the Hyper Space Arcade bonus game in my next game ‘Wing Kings’.

That’s it for now, until next time chums!