Hello!  So it’s been a long time since I’ve updated this blog.  Over a year!  Bla bla should try and do it more often.

So a whole lot has changed since the last update!  Achieved a whole lot and done some ace projects with some new ones on the horizon. Anyway, less chat more updatez!

This was finally released in North America on 4th November 2014, and 5th November 2014 in the EU.  Fireworks night no less!  Quite fitting.  Here’s the launch trailer:

Avoid Droid ended up being called Don’t Die, Mr. Robot.  That’s because Lucasfilm have a trademark on the word ‘Droid’ which apparently they vigorously enforce.  We didn’t fancy that so we changed the name.  Actually, it was our pal Rob Fearon who came up with the name, so cheers mate!

It did well!  Currently at at a metacritic score of 77 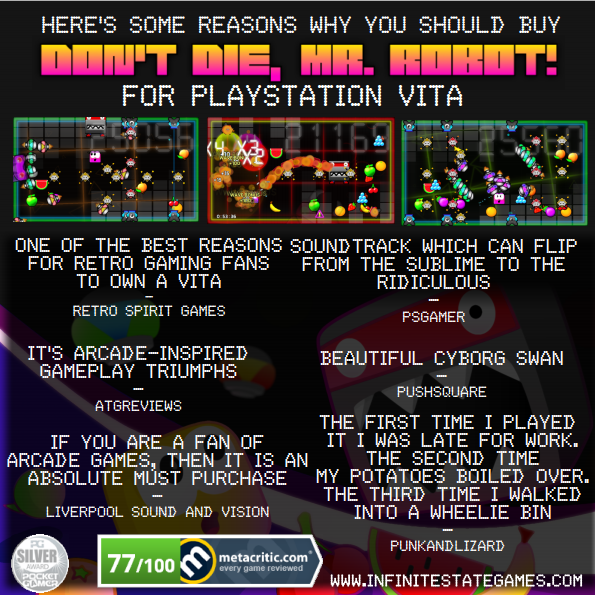 It got load of awesome reviews which you can read about here on the ISG blog:

DDMR was the biggest release of our independent career so far, so it’s quite a big deal for us to have finished it, got it out the door and well received by critics and players alike.  Plainly speaking – we did a great job considering no budget!

I’m now working on the soundtrack to Rob Fearon’s Death Ray Manta for PSVita and PS4. It’s a musical collaboration with the very talented Bristol based singer and musician Jenny Ramage under the banner of ‘Jenny and the Giants’.  This is quite an interesting project because it’s the sound track for a game, but also a concept album of catchy electropop songs which tells the story of a girl who’s fell in love with a sentient, omniscient space fish which fires lasers from its head.

The game is due out at the end of 2015.  At the time of writing this blog, we’re just mixing down all the tracks.  Next week we’re off to the studio to master them, so I’ll probably try and blog about that part of the process because it’s interesting!

Remember Frutorious? Don’t worry, no one else does either.  However, we do!  During the last 2 years while doing all our other stuff, we’ve been quietly and slowly working on the ultimate edition of Frutorious.  We’ve fixed all the shitty levels, we’ve put in a new guide line to help you aim – and we’ve given the whole game an HD overhaul upping the quality of the graphics.

It’s playing great, it’s looking great, and when we’ve got a bit of spare time we’ll release it!  But only when it’s the right time.  One does not simply ‘ship’ a game like Frutorious HD.

Here’s some video of it running –

Oh yeah!  On top of all that, we’re making a new game over at ISG!

Wing Kings is an air combat dog fightin’ roguelike. We’re developing it for PSVita and PS4 for release in North American and Europe (sorry, Japan!)

We’ve hired an artist for this one too (WOWZERS!) He’s an industry veteran who may have worked on some of your favourite games, who knows! Check out this hot mock up…

We’re currently prototyping, and already dogfighting is tense and explosive, while landing is nailbiting and exhilarating.  So far so good!

And that’s it!  Loads of great stuff going on, and personal satisfaction levels at an all time high – for which I must thank Jenny and Charlie for being my two sources of joy, productivity and inspiration.  And thanks, yourself, for reading about my things wot I’m doing!

See you next time!